Posted at 13:32h in Success Stories by KadasigAid 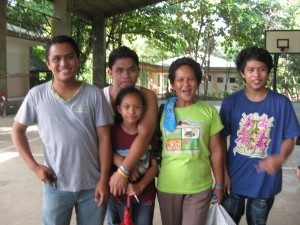 Ryan, his brothers Jojo and Jayjay along with sister Ruby live in Pasil, Cebu, with their mother Rebecca. Ryan was part of a sponsorship run by our now social worker/co-ordinator, Ms Emely Alcoseba within the Pasil community by another organisation. Unfortunately the sponsorship program was closed by the agency which meant that Ryan was left with no sponsors to complete his dream to finish his studies. Ryan asked to follow Emely to the Kadasig program.

Following this closure, Ms Emely Alcoseba, who was working part time with the Good Shepherd Sisters at Kadasig, became the full time social worker at Kadasig. As Ryan was an outstanding young man Emely decided to bring him with her to Kadasig to seek a sponsor. The rest is history!

Ryan was given the opportunity to come to Australia as part of seven young people from Kadasig for World Youth Day. Generous people here enabled this to happen and what a time it was! Ryan stayed in Melbourne and then went to Sydney having many wonderful experiences to add to his life experiences.

Ryan studied primary teaching, graduated, and passed the Board exam which is vital in the Philippines. He is currently teaching grade 5 students at Pasil Elementary with approximately 55 students in his class and he has recently taken up studying for his Masters in Education.

Jayjay, Ryans other brother, stopped his schooling after graduating high school but after a couple of years returned to study in another sponsorship program and is now employed in computer and network support.

What a special family they are! Many travellers have been fortunate to meet some of the family in Cebu. Kadasig is so proud of this family and it is an example of educational sponsorship making a difference.